A while ago I was working on a project in Django that had many tasks that needed to be executed asynchronously such as sending emails, generating reports, and checking some database related issues.

Executing asynchronous tasks in Python can be made in multiple ways, one of them is using celery, a distributed task queue written in Python which has proved itself to be a great solid task queue system.

And if you’re using Django then there is a Django app to make your life easier, django-celery.

Now as always I like to make my own life easier also by implementing generic solutions for my needs, so I have written this simple piece of code to create a function decorator that declares the function as an asynchronous task, which means that by just adding this decorator to the function it becomes asynchronous.

So let’s get started! 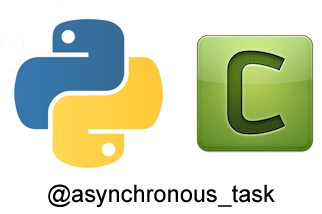 I wrote this code in a file called celery_tasks.py which probably the place you’ll have your all celery tasks, it adds a task called execute that is responsible for executing the passed function and parameters.

The code looks like a mess I know, but simply what it does is that you pass this task the following parameters:

This decorator simply wraps the function in a call to the execute task on celery, so that it’ll be executed asynchronously, it accept an optional parameter that defines whether the decorator should check if celery is running and if it’s not then execute the function synchronously, it is set to False by default because it takes some time to check celery, so it makes the performance poor a little bit.

Now we can us it on any function inside our code:

Now in your code you just simply don’t change anything, all the calls to these two functions will be asynchronous calls.

The source code is licensed under the GNU Public License (GPL).

You can download a copy of celery_tasks.py and celery_decorators.py from this Gist: https://gist.github.com/3874979

Hope this helps somebody to perform faster 🙂

This site uses Akismet to reduce spam. Learn how your comment data is processed.